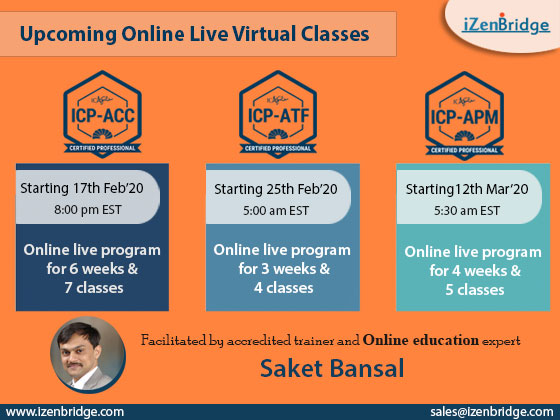 Really happy to inform you that I have successfully cleared PMP in my first attempt with Above Target in all the Process Groups. Lots of Thanks to the Izenbridge Team for their resources and support. I cleared it on 14th Dec, but was too busy for last 2 weeks to sit and post the success story.

I took my preparations as below -
a. I read PMBOK & Rita twice cover to cover. During each read, after reading each chapter from PMBOK, I cross referred Rita.
b. After 1st reading of both PMBOK & Rita, during the 2nd read I started preparing my own hand notes, taking the important points from both these books.
c. After the 2nd read, I hardly opened PMBOK or Rita. Till the exam day, I read my note only. This saved me a lot of time for shuffling through multiple books and resources afterwards while revision.
d. During the preparation, I kept on updating my notes with important points, which I found from various resources (youtube videos, online articles etc.). During this, izenbridge videos, study materials and forum discussions helped me a lot to built up my concepts. Special thanks to Saket for his well explained & informative videos and Manish for replying to my each and every queries posted in the forum.
e. I started my preparation from late August. From early November started giving mock tests. I attended all the mocks of izenbridge, Oliver 75 & 175 questions, simplilearn free mock, Edwel 75 question and Rita's Chapter end Practice Exams. Initially my score was around 72-75%, afterwards I was getting 80-85%.

The Exam
a. I don't know about other, but for me it took about 15-20 minutes to get accustomed with the everything in the exam center. The most obvious reason was that, I gave all the mocks sitting at home, in a comfortable condition. Whereas in Exam center the atmosphere was totally different. The guy next to me was writing GRE. For first 45mint. or so he kept on typing and the sound added to the distraction. Although earplugs were provided, but it made me more uncomfortable. I am emphasizing on these, because these things matter a lot. In my case, during the first 20minutes, I left & marked about 8 questions, out of which about 5nos were quite easy.
b. There were 2 maths questions from EVM. Very easy and basic. Other than that no numerical was there.
c. Most of the questions were situational and none of them seems to have any similarity with the questions, which I had solved in mocks.
d. No direct question from ITTO.
e. About 20-30% questions were lengthy. Rest were 3-4 liners. Although I read all the questions multiple times, to avoid missing any tricky points.
f. I finished the Exam in about 3hr and 15minutes & did a revision afterwards.

Some points to remember
a. Don't take too many days for preparation. It gets boring if you drag it too much. I slotted my exam on 14th Dec. By mid or late November I was getting impatient.
b. Don't get carried away by good percentages in mocks. They are for increasing your confidence, identifying knowledge gaps and increasing patience to sit through 4 long hours. In exam, the questions are totally different.
c.I was allowed only one break during the test. The test center people said that's the rule, although as far as I was aware, multiple breaks are allowed in PMP. This made things quite uncomfortable as about 1hr duration or so I felt the urge to use the washroom, but was not allowed.
d. I already told about the initial uneasy situation. There may be other issues too. Don't expect to have a comfortable chair (mine was having height issue). The fonts in the screen were too big, which couldn't be adjusted.

But don't be disheartened as you might have faced such kind of situations during innumerable exams in your school and college days. Best of Luck to all future test takers!!!!
Top

Congratulations! This is a reward of hardship,. Well deserved!

Would like to know what are the ID proofs and other documents to carry on the day of the exam.
Top

Would like to know what are the ID proofs and other documents to carry on the day of the exam.

Passport, call letter from metric and eligibility letter from PMI. You should receive a call from prrometric a day before exam where they will let you know all details.

Would like to know what are the ID proofs and other documents to carry on the day of the exam.

Passport, call letter from metric and eligibility letter from PMI. You should receive a call from prrometric a day before exam where they will let you know all details.

I have the eligibility email from PMI. But i have not received any call letter via email directly from pro-metric centre. Its been a month that i have scheduled for the exams.

In PMI website, i can view my eligibility ID and vendor conformation number with exam schedule date with timings.

Since i have not received any email from prometric centre, Should i call them to get a confirmation !
Top

thank you for that piece of info.
loged in to pro-metric website and got my call letter.
Top

Users browsing this forum: No registered users and 3 guests